IT'S DANGEROUS TO TEASE ME#WIPITUP WEDNESDAY 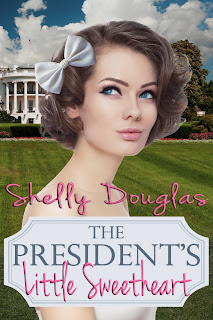 Welcome to WIPITUP - the place where you can find a work in progress, or a hot new release.  This week, I'm sharing a scene from our newest title, The President's Little Sweetheart, which was just released last week.  Hope you enjoy!


David stood behind Cassidy allowing his hands to wander down the satiny outlines of her dress as he nibbled on the nape of her neck. “My God, you feel like heaven on earth.”

Cassidy threw her head back. “I hope no one needs you for the rest of the night.”

“I think we’ll be alright, unless, of course, someone launches a nuclear warhead in our direction.”

Cassidy gazed at the stars that shined outside the large picture window of their bedroom. “Sometimes, I can’t believe this is happening. Who would’ve thought I’d be in a relationship with the president of the United States?”

David slid his arms around her waist. “Don’t let the job description fool you; we have hot blood running through our veins just like everyone else.” He turned her around and touched her cheek. “You looked exceptional this evening, Ms. Cassie. Have I told you that already?” Tenderly tilting her chin up, he hungrily pressed his mouth against hers.

“Mmm hmmm, but unlike the rest of the world, I love when you’re redundant,” she whispered.

“Smart ass,” David joked with a swift smack to her rump before unzipping the back of her black dress. Watching closely, he reveled in her sexy gyrations as she gradually shimmied out of the long satin fabric. “But you’re my smart ass. All mine.”

Detaching Cassidy’s bra with nimble fingers, he continued down her silky, smooth back to squeeze her round, ample behind. She quietly mewled as he kissed her belly, his hands effortlessly sliding her dress to the floor. Pulling her against his chest, his finger barely touched and teased her warm and wet folds. “My naughty girl isn’t wearing panties tonight,” he whispered, leading her to the bed. “Do you know how dangerous it is to tease me like that?”

Quickly shedding his clothes, he placed her in the center of their king-sized bed and admired the luscious feast before him. Slowly, his lips lowered onto hers, and their mouths locked into a searing, deep kiss as he reached underneath to stroke and caress her smooth, silky bottom. Bending into him, she moaned as his moist tongue slid across her collarbone, and after he gently took a mouthful of one pillow-soft breast, she reached to lightly touch his swelling cock, wrapping her fingers around his taut skin. Fondling and caressing him, she desperately wanted to guide him deep inside her drenched sex.

“Not so fast, sweetie,” he insisted, his light tone instantly morphing into a deep, serious one. “Place your arms above your head and grab onto that railing behind the bed.”
As she complied, her lips curled into a wry smile. “What are you going to do?”

He contemplated his answer, tweaking and rolling one nipple between his thumb and forefinger. “Well, you teased me, so it’s only fair…”

Dipping his head, his gaze tangled with hers. “Don’t you dare let go of the metal until I give permission,” he warned with a cartoonish cat about to eat the mouse grin on his lips. “I intend to nibble on that soft pussy of yours until you scream.” As he lowered his mouth to relieve the ache between her thighs, David brushed the slit of her velvety smooth lips with the flat of his tongue from top to bottom as Cassidy parted her legs even further. The corners of his mouth curved upward while she uncontrollably twitched and writhed in anticipation of a climax. The intoxicating scent of her arousal filled his nose as he relentlessly sucked and nibbled on her sensitive bud.

Cassidy lifted her hips off the bed in hopes that his tongue would fuck her tight cunny. “Deeper! I need you deep inside me, David!” she begged.

“What happened to that polite, sweet girl we all know and love?” he teased.

As he nodded, her fingers quickly let go of the bars, and David’s firm shaft pushed between her legs while pulling his girl close. The swollen tip of his aching cock penetrated ever so slightly, and with each stroke he permitted another fraction of an inch to enter her. Cassidy’s hips wriggled as her hands grasped at his ass, hoping to force him deeper inside, but only gradually did he edge his broad shaft into her drenched, swollen sex to stretch and fill her tight canal. Finally pushing his full, hardened length downward, he exited leisurely—only to drive back anew with deep powerful thrusts, and she moaned in gratitude, her pussy clenching onto his cock, trembling with excitement. David’s strokes were long and rhythmic as her hot, slick muscle pulsated around him, and when she arched dramatically for one last final thrust, he exploded and remained deep inside while her clit pounded with a strong and steady beat.

With their bodies locked as one, their hearts beat wildly and their lungs fought for air until each sensation of their intense orgasm was savored. With the gaze of a man head over heels, he patiently stared at her satisfied expression, waiting for those beautiful emerald green eyes to open. Threading his fingers in between hers, he extended her arms upward and kissed her mouth tenderly. “I love you, Cassie.”

She wrapped her arms around him and snuggled under his chin like a little kitten. “I love you more.” Her voice was quiet and low. “David?”

“It sounds like there’s someone in the hall.” There was a soft knock on the door.

And now the blurb:

When President David Buck sees his secretary’s assistant, twenty-five-year-old Cassie Miles, surreptitiously smoking a cigarette outside his Oval Office window on a cold January day in 1966, his desire to lovingly dominate a woman returns for the first time since his wife’s death.

Receiving a stern lecture from the most powerful man in the world brings a blush to Cassie’s cheeks, but the idea of being chastised like a naughty little girl arouses her deeply and over the coming days she cannot get the thought of being taken over the president’s knee off her mind. Her fantasies become reality soon enough when her sharp tongue gets her into trouble and David bares her bottom and spanks her soundly, informing her that from now on he will be the firm, loving daddy she needs.

Before long David is bathing his little girl, caring for her when she is sick, and spanking her bare bottom whenever she is naughty. Cassie delights in her daddy’s attention, and being taken in his arms is better than she would have ever thought possible, but as their relationship deepens David and Cassie face the scrutiny of political friends and foes alike. When it becomes clear that there are more sinister enemies lurking in the shadows who will stop at nothing to gain power, will David have to choose between his love for Cassie and his ability to lead the country?

Thanks for stopping by today, and don't forget to take a minute and visit some of the other people on this blog hop!  They'll be happy to see you! :)  ~ shelly