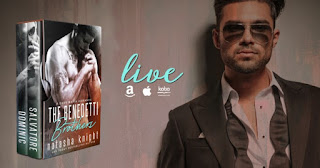 It all started with a contract signed by him, then by me, while our families watched. While my father sat silent, a man defeated, giving his daughter to the Benedetti monsters.

I obeyed. I played my part. I signed my name and gave away my life. I became their living, breathing trophy, a constant symbol of their power over us.

That was five years ago.

Then came the time for him to claim me. For Salvatore Benedetti to own me.

I had vowed vengeance. I had learned hate. And yet, nothing could have prepared me for the man who now ruled my life.

I expected a monster, one I would destroy. But nothing is ever black or white. No one is either good or evil. For all his darkness, I saw his light. For all his evil, I saw his good. As much as he made me hate him, a passion hotter than the fires of hell burned inside me.

I was his, and he was mine.

My very own monster.

I owned the DeMarco Mafia Princess. She belonged to me now. We had won, and they had lost. And what better way to teach a lesson than to take from them that which is most precious? Most beloved?

I was the boy who would be king. Next in line to rule the Benedetti Family. Lucia DeMarco was the spoils of war. Mine to do with as I pleased.

It was my duty to break her. To make her life a living hell. My soul was dark, I was hell bound. And there was no way out, not for either of us. Because the Benedetti family never lost, and in our wake, we left destruction. It’s how it had always been. How I believed it would always be.

Gia was just a job. Just another girl caught in a world of monsters.

It didn’t matter that I liked the look of her.

I didn’t care that she cringed when she saw my soul.

I liked her fear.

And I wanted her.

Monsters didn’t get to live happily ever after, though. I knew one day I’d have to go back. Because time neither forgave nor forgot.

And neither did I.

Old debts needed to be settled. Enemies punished. It was past time I returned to the family business. I’d been gone far too long.

All my life, I believed in fairy tales. Not the Disney kind. Never those. I always knew life was darker than that.

I was the daughter of a foot soldier. The sister of a snitch. A nobody.

Monsters had been part of my life for as long as I could remember, but none as dark as Dominic Benedetti. None as cruel. None as broken.


I had no illusions about what he was. I had no desire to save his soul. And I couldn’t care about his bleeding heart.

But love isn’t always beautiful. It could be a twisted, ugly bitch.

I’d always known this was the kind I’d find. The only kind that could touch me.

Because some of us, we belonged in the dark.

And Dominic and I belonged in the dark.

Author’s Note: This duet contains both Salvatore and Dominic's stories. These are steamy, dark mafia romances where the happily-ever-afters are heard earned. Intended for mature readers. NO Cheating.