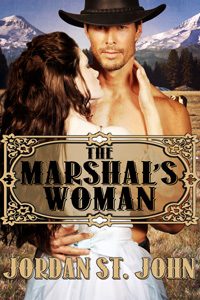 Here is a tantalizing excerpt from The Marshal's Woman, Jordan St. John's latest book.  Hope you enjoy and buy a copy.  I did! :)


****
“Your turn, Hannah.” Gabe’s visage was all determination. She couldn’t weasel her way out of this one. But what had he said—that she meant a lot to him?

Hannah adopted an apologetic attitude. “Is this really necessary? I’ve learned my lesson. I promise to heed your instructions in the future.”

“I’m reminding you that this is the second time you disobeyed me, and so I guess there are some lessons you still haven’t learned. Come over here,” he said, crooking his finger.

Hannah rose and approached Gabe. He took her hand and eased her down across his lap. The posture, face down over his knees, was uncomfortable. Her nose almost hit the wagon’s floor boards. Her feet flew up in back. The hard muscles of his thighs were both a sturdy platform for her impending atonement and a reminder of the man’s strength, strength he had called upon to save her from her own recklessness. The fabric of her dress brushed her thighs as it slid up her legs. It fell across her back, tickling the nape of her neck. She felt his fingers at the waistband of her drawers and she gasped as he slid them down, baring her. “Stop. This is indecent. You can’t.”

“I can and I will. You deserve what is coming, Hannah, and I want to make sure you feel this.”

A subtle disturbance in the air signaled the beginning of her chastisement. The first splat of his palm on her tender bottom was an explosion, landing squarely across the center of her fanny and sending a shockwave that rippled her flesh and spread throughout her core. More spanks followed in rapid succession. The spanking burned, a stingy uncomfortable heat that grew ever more intense as smack after smack landed on her bare bottom. She could only imagine what she looked like, bare bottom exposed, her rear cheeks wobbling lasciviously with each crack from Gabe’s hard hand. Good God, he had hands made of stone! Her bottom felt scorched as if she’d backed into a bonfire. He’d let Lori keep her drawers up, and still she’d seen the bucking and jiggling of her flesh, growing pink then red as his hand struck. The spanks were like muffled rifle shots in the confines of the wagon, loud pops that assailed her ears as much as the impacts assailed her scorched behind. She wriggled shamelessly, not caring that her squirming exposed her sex to him. He alternated between groups of rapid flurries and slow deliberate smacks. It was these measured spanks that made her feel as though with each one he intended to drive a point home.

Smack! I love you, Hannah.

Wait, what had that last one been? Had that been in her head or had he said that? He had stopped spanking her. His palm now rested on her bottom, rubbing the sting away.

“Hannah, can you understand? I love you. The idea of something happening to you terrified me.” He flipped her over and pulled her to him in a hug. Hannah threw her arms around him and sobbed, letting the tears come in a flood of release. There had been so much doubt, so much fear. And now he’d said he loved her.

And now the Official Blurb:

Deputy US Marshal Virgil Cotton has dealt with his share of sassy women, but when he is given the task of protecting Tansy Fletcher, the governor’s beautiful, headstrong niece, it quickly becomes clear that she is in desperate need of a firm hand applied to her bare backside.

After she witnesses a murder by a ruthless crime boss in San Francisco while pursuing her aspirations as a newspaper reporter, Tansy becomes the target of the killer’s hired guns, and Virgil is tasked with escorting her to a remote Oregon ranch where she will hopefully be safe. He makes it clear he will expect her complete obedience during the journey, but the impetuous girl promptly tests him and earns herself a painful, embarrassing bare-bottom spanking.

Though Tansy is shocked to be punished in such a childish, humiliating fashion, Virgil’s dominance sets her desire burning as hot as her well-spanked behind. She longs to be taken in his arms, and when he claims her at last his skilled lovemaking leaves her utterly satisfied.

Upon reaching their destination, however, they discover that a shadowy gang of night riders is intimidating neighboring ranches into selling their land for mysterious reasons. Can Virgil thwart this band of outlaws and keep his woman out of harm’s way?

Publisher’s Note: The Marshal’s Woman includes spankings and sexual scenes. If such material offends you, please don’t buy this book.

Jordan St. John hails from the Pacific Northwest where he is retired and spends his days writing romantic thrillers spiced with liberal doses of BDSM/spanking eroticism. Jordan writes in multiple genres in romance including sci-fi, medieval, paranormal and historical western. When not writing, Jordan travels the West and Hawaii with his wife of 41 years and enjoys his family and grandchild. Jordan is also a musician and plays a pretty mean jazz guitar.